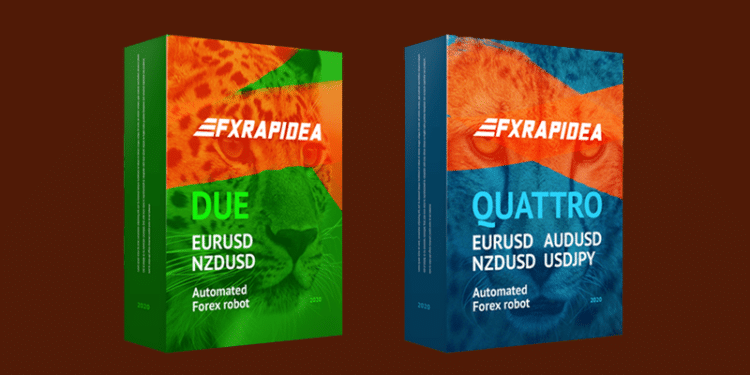 Welcome back! We’ve prepared a review of the FX Rapid EA.

There are introduced two packages of the EA: Due (EUR/USD and NZD/USD) and Quattro (EUR/USD, AUD/USD, NZD/USD, and USD/JPY).

Let’s sum up the most important intel about the EA and strategy it runs:

How to start trading with FX Rapid EA

As we can see from the main features, the EA is a highly profitable fully-automated trading solution. It trades “rapidly” (?) and doesn’t trade against the trend. It can be run on any brokers that support the MT4 and MT5 platform trading.

The Due package costs $270 and includes one life-time license for any (type?) account, free updates, user manual in PDF, and 24/7 support.

The Quattro costs $350 and unites the same services.

We can rely on the 30-day money-back guarantee.

The developers tested every symbol with two risk levels: 35% and 100%. Let’s take a closer look at them.

It’s a backtest with 100% risks of the EUR/USD symbol on the H1 timeframe. The modeling quality was 90.00% with 1,2M bars in the test. The initial deposit was $5k. The total net profit became $10.9M for over three years. The Profit Factor was quite high and equaled at 3.39. At the same time, the maximum drawdown was insane (89.11%). If it happened on the real account with 1:200 leverage or higher it’d be triggered Stop Out. The win-rate across shorts and longs was equal and amounted to 61%.

This backtest has the same parameters, but it’s run with 35% risks to the account balance. The initial deposit of $5k became $73.6k of the total net profit. The maximum drawdown was noticeably low (31.94%).

It’s a real USD account on FXOpen (it’s a good broker house). The EA trades without leverage on the MetaTrader 4 platform. The initial deposit was $1500. The total gain amounts to +727.64%. The monthly gain is huge and equals 24.56%. The robot has got a maximum drawdown of 54.05%. The account was deployed over ten months ago.

We have proven results only for a EUR/USD currency pair.

The EA prefers to trade during European and a little bit during the end of American sessions.

It performs equally every day.

It runs with several percent of risks to the account balance.

The devs told us that the robot doesn’t keep trades for several days, but the results show the opposite. Many trades have been closed after 3, 8, and even nine days.

It looks like the EA is broken. The September 2020 results look like a joke comparing to the previous months. In the first week of October 2020, there’s any deal closed as well.

The site has no reviews, but both accounts are watched by 14 people. It’s not so much, but it shows that traders are interested in this EA.

As we can see, the results vary depending on the package. Due has a high maximum drawdown and 40 days of mediocre trading results when Quattro provided a solid profit. If you have thoughts to buy any of the packages, we’d like you to contact their support to ask what happened with Due’s results.