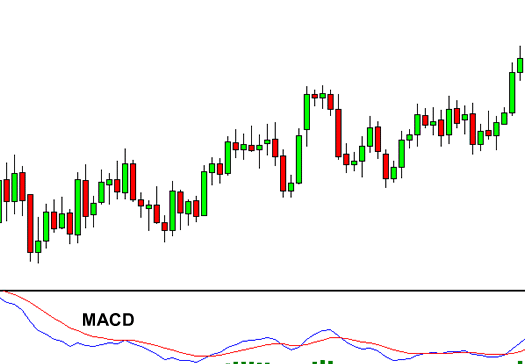 In Forex Trading, MACD or Moving Average Convergence Divergence is considered one of the most potent technical tools used by traders. The indicator is generally used to check the direction as well as the strength of a trend and to define reversal points.

As indicated in the chart above, there are usually three numbers that are used as part of its setting.

It should be noted that there is a common misconception regarding the drawing of lines of the MACD. The two lines drawn do not indicate moving averages and instead indicate the difference between the two moving averages. This can be further explained by the following example

Traders are provided several types of signals when using MACD, some of these are overbought/oversold levels, centerline crossovers, zero line crossovers and divergences. It’s a general rule that the market is said to be bearish when the MACD is below 0 and bearish when it is above 0.

Traders can use the MACD as an oscillator, as it is common knowledge that the market tends to return to the mean with the Fast-moving average retuning to the slow one.

As indicated in the above diagram, the bigger the divergence between the two moving averages, the higher the probability of the price correction that would allow the MACD to return back to 0.  Traders can thus trade the extreme highs and lows of the MACD, as it signifies that the market is either overbought or oversold. Traders should judge extremes by studying the comparison of the MACD levels. Such signals require a confirmation from technical indicators such as price action.

In the above chart, the MACD gives similar trading signals as a two moving average system does.  Traders can use a strategy where they can buy when the MACD rises above the 0 level and sell when the MACD falls below the zero level. It should be noted that this approach is profitable only in the presence of strong trends, implementing this during a volatile sideways market, can result in losses.

The MACD produces favorable results in trends that have a narrow price range. Traders can thus establish a trend, using only those MACD signals which fall in line with the trend.  Thus, in the figure above, it’s clear that only negative MACD crossovers should be traded when in a downtrend with the signal line.

The MACD is both a trend as well as a momentum indicator. It is a very useful technical indicator that produces a variety of signals, forming the basis of a solid foundation in any trading system.

The Four Important Forex Indicators Every Trader Should Know