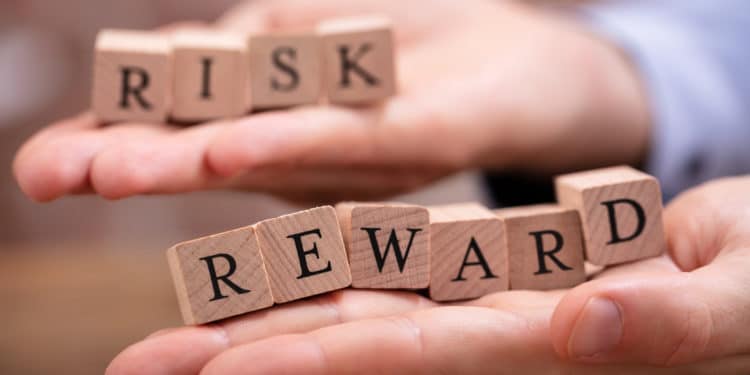 While the concept of risk to reward is not entirely perfect, it is generally the framework for consistent profitability. Unlike trading binary options where the reward tends to be the same as the stake or a few times higher at the most, the gains in spot forex can be much greater.

Numerically speaking, it only makes sense to have winning trades larger than the losing ones over an extended period. Any trader wants the maximum reward potential in relation to a lower amount of money put down.

This is particularly the case in swing trading, exemplifying one of the benefits of trading in this style. Too often, traders emphasize overly on winning percentages, especially in the short term. Having this mentality is further exacerbated when one lacks the fortitude to execute a great enough series of trades to realize the power of risk-to-reward.

Regardless, swing traders have to consider this concept differently than most, which we’ll further examine in this article.

What is the ideal risk-to-reward ratio for swing traders?

Of course, nothing in forex is textbook or universal. However, it’s widely accepted the average swing trader will at least have a 1:5 risk-to-reward ratio.

It is possible to achieve much higher in some cases primarily through using tighter stops, scaling in at predetermined points, and holding positions for longer in favorable trending markets.

Most of the time, it’s recommended to have a ballpark reward ratio based on an individual trading strategy instead of a figure set in stone as nothing is guaranteed in any market. The difficult part with risk-to-reward is the grey area between the risk and reward. These concepts will be explored in more detail in the forthcoming sections.

The statement in the title above is the fundamental truth of trading forex using any approach. Whenever a trader places a position, it is very likely to stay in the red in the initial stage before moving anywhere.

A trade management mistake made by many is attempting to eradicate the risk by moving the stop loss to breakeven or some predefined point. Swing traders can also easily commit this error. One thing to understand with swing trading is time and having adequate patience in dealing with it.

The job of a swing trader is leaving a position untouched at least until the end of the New York session. This scenario applies when their order may be in the red or perhaps in little profit.

If the price action results in the position staying this way the following day, they may consider waiting for the end of it before moving the stop loss to a logical point using Fibonacci, lows and highs, support and resistance, etc.

What about if the position is in some slightly bigger profit after entry? In this scenario, the trader may consider moving the stop loss to a certain level, assuming the move is not false and the price action by the end of the day suggests new momentum.

These are some circumstances a swing trader will typically encounter. Having the advantage of time means one won’t be rushed into making hasty decisions without proper thought. Despite the reduced time involvement, swing traders should still observe the price action, especially around the beginning and end of the New York sessions.

The challenges of dealing with a high reward

Perhaps the biggest challenge of swing trading is the expectation of a high reward. Unlike day traders or scalpers who can realize gains more frequently, a swing trader needs to wait for several days or weeks.

More often than not, price takes a long time to move a great distance without minor retracements. In some cases, the market can move substantially in a day, though this is an anomaly.

The hallmark of a successful swing trader is having the patience to hold their positions. Typically, an extended move in forex takes at least two weeks to move significantly. Thus, this is the time horizon one should have for every position that goes into profit.

Developing the mentality of not taking open gains off the table too early comes with experience but is not something swing traders should do. Here, we deal with the issues that many traders face; taking partial profits.

Partial profits can take on many forms, ranging from 23.6%, 38%, 61%, or XX of the move, according to Fibonacci retracements. Again, time is a swing trader’s friend as it should dictate how the market is reacting at certain periods.

The trick is leaving enough room for price to move while accepting the possibility it may not move to the desired level. An error swing traders should avoid is being in a position for too long without securing some profits in the hopes the market will go towards that point.

Risk-to-reward is not a one-size-fits-all and is more complicated than most traders think. Nonetheless, it’s one concept that needs proper understanding and appropriate application, especially for swing traders.

Every moment in forex is unique, meaning traders should react logically rather than having recency bias. To summarise, here are the key points for swing traders to better deal with risk-to-reward ratios: