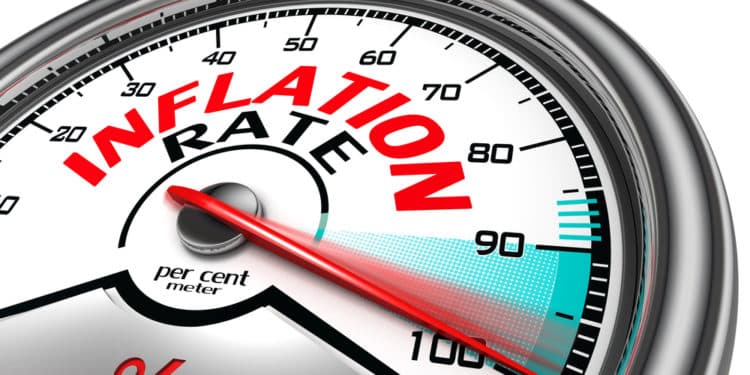 Economic data play an essential role in forex trading because they provide measures of the state of the economy. These numbers are used in fundamental analysis, which is one of the three methods that traders use to predict where a currency pair will move to.

In this article, we will focus on inflation data. We will explain what it is and how it works, how to use it in trading, and why it forms an essential role in fundamental analysis.

Inflation refers to the overall change in the cost of items that people buy. These items include food, tobacco, alcoholic beverages, furniture, clothing, and gasoline, among others. Inflation happens when the price of an item rises in a given period.

Inflation is an important concept because it means that, over time, the value of a fiat currency like the US dollar or the euro will always go down. For example, in the 1950s, $100 was enough money for rent in some American cities. Today, it is almost impossible to pay for rent using the same amount.

The opposite of inflation is known as deflation. It is simply the situation where prices of items are falling. While many consumers would prefer a situation of lower costs, in reality, deflation is not the desired situation. For one, it is usually a sign that the economy is not doing well since demand is low. Also, it usually leads to a higher unemployment rate since companies are fetching a smaller amount of money for their goods.

Another term in measuring inflation in a country is known as stagflation. It refers to a situation when high inflation is accompanied by a high unemployment rate. It is one of the worst situations that a country can be in.

In carrying out economic analysis, economists have found a close relationship between a country’s unemployment rate and inflation. For starters, the unemployment rate refers to the percentage of people of working age who are not working.

A concept known as Philip’s curve has been developed. Essentially, the argument is that a low level of unemployment rate leads to a higher rate of inflation. The argument of this is relatively simple. When the unemployment rate falls, it triggers companies to increase their wages. As a result, this leads to more consumption, which, in turn, leads to higher demand and then higher cost.

Still, at times, because of external factors, Philip’s curve does not work. A good example of this is in countries like Japan and Switzerland. While these countries have a history of low unemployment rates, their inflation rate has always been low. At the time of writing, Japan has an unemployment rate of about 2.9%, while its inflation is almost zero.

The Japanese situation is relatively easy to explain. See, the country’s labor market is relatively different from that of other countries since people tend to remain with the same employer for many years. At the same time, consumer spending tends to be low because of the aging population.

The impact of inflation data in Forex market

Forex traders often focus on inflation because of its impact on interest rates, which are usually set by a country’s central bank. Central banks like the Federal Reserve, European Central Bank (ECB), and the Bank of England (BOE) are given the mandate of ensuring that the unemployment rate remains low and that inflation is steady.

There are several gauges of inflation that forex traders look at, including:

How to trade using inflation data

Trading using inflation numbers is a relatively simple thing. First, you need to be aware of when the data is coming out. The economic calendar will help you know when this data will be released.

Second, you need to have the historical context of inflation. For example, you should know what the central bank said about inflation recently.

Sometimes, strong inflation data can be accompanied by a little change in a currency pair. For example, if the Fed has committed not to hike rates for a while, the short-term inflation data will not have a major impact.

As a trader, you cannot ignore the concept of inflation since it is one of the most important data in the economic calendar. In this article, we have looked at what inflation is, the concept of Philip’s curve, the key inflation gauges, and some of the key steps to use when using the data to trade.