The Spread in Forex: For Dummies 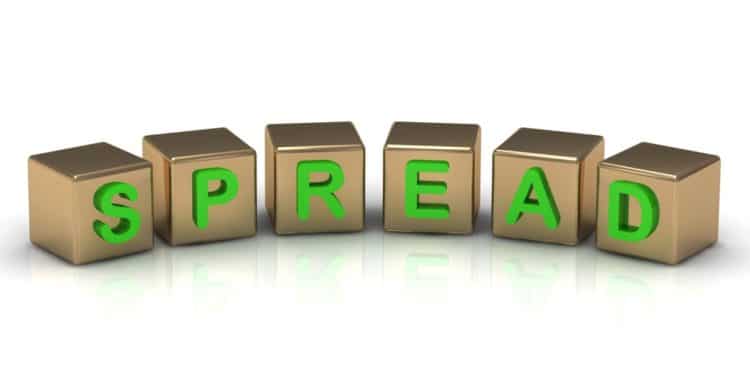 In forex, we have multiple liquidity providers in ECNs or electronic communications networks dealing with each other. These groups have trillions worth of tradable currencies moving between different financial companies; forex brokers are part of such institutions.

When clients wish to trade a particular currency pair or market, their broker places the order and finds a liquidity provider to fill that position. For their efforts, brokers apply a mark-up between the prices received from the providers and the price a trader eventually trades.

So, how does the spread work?

Let’s look at a simple example. If a trader wished to buy EUR/USD, they would receive a quote similar to the image below from their broker.

We measure price increments and decrements in what is known as pips (percentage in points) in forex. In most cases, it is essentially the change in the fourth or fifth decimal of a pair, but in JPY pairs, it is the second.

If they decided to go long at 1.1051 (the bid or buying price), their eventual order would execute at 1.1053 on their platform because of the two pip spread.

Conversely, if they wished to go short at 1.1053 (the ask or selling price), their final order would fill at 1.1051 on their platform due to the same cost.

Hence, this is why we often refer to the spread as the difference between the bid and ask price. More simply, this is the primary trading cost any trader will encounter regardless of their strategy, as it occurs on every position, even when it’s opened for a second.

The spread is the cheapest in the most-speculated markets, namely the major pairs (EUR/USD, USD/CHF, AUD/USD, etc.).

Once we move from this to the minor or cross pairs (GBP/CAD, CAD/CHF, EUR/NZD, etc.), this slightly increases and then becomes more pronounced in thinly-traded instruments, which are exotic pairs (USD/ZAR, EUR/NOK, GBP/ZAR, etc.).

In forex, we have two types of spreads: variable or floating and fixed.

As the term suggests, a variable spread changes variably in line with market conditions. For instance, during busy periods where there is higher volatility, the spread will widen slightly above its expected range because of the increased trading activity.

The prices of an e-hailing service like Uber typically increase when there is more demand —  the same applies to the spreads. The variable model is typical with most forex brokers and is generally seen as more transparent since it reflects natural market conditions from the recognized currency providers.

Even so, it isn’t recommendable for every trader because of the unpredictability of being variable. Those frequently trading like scalpers and day traders generally don’t prefer these spreads because they can widen when they are most busy executing, increasing the chances of slippage.

Again, as the name suggests, this remains relatively constant even when it should naturally vary. A broker achieves this ability by effectively ‘market making’ where they don’t send their clients’ orders to external providers.

In other words, they provide the liquidity themselves directly from what is known as a dealing desk, an in-house facility. With this model, it is the only way for them to provide fixed spreads, which offers the advantage of more predictable costs a vast majority of the time.

In most cases, fixed costs are technically cheaper on a trade-by-trade basis. However, unlike variable ones, a commission is applied for every round turn, i.e., for opening and closing a position.

Therefore, they might not necessarily be cheaper, in the long run, depending on the commission rate, one’s trading frequency, and the markets they trade.

How does the spread affect on a day-to-day basis?

As the primary trading cost for any trader in the markets, it is a big deal. Fortunately, the issue isn’t so much that we see brokers offering unusually high spreads in most cases, at least for major and minor pairs. Brokers have become much more competitive in recent years.

What is more considerable is someone’s trading style and the markets they trade. The higher one’s trading frequency is, the more they will pay in spreads. If their profits are not marginally greater than their risk, such costs can make a dent in their gains.

For instance, scalpers and, to some extent, day traders aim for small targets or pips regularly. We can typically find the spread and other commissions eating into their profits because of the higher frequency.

Regardless of the trading approach, there is no way of completely removing these active trading costs. Therefore, higher-frequency traders would probably consider fixed spreads.

Conversely, those trading less regularly, namely swing and position traders, won’t concern themselves whether the spread is fixed or floating since their profit targets are substantially larger.

Another point about these costs is the different instruments. Generally, a vast majority of short-term traders stay away from exotic markets primarily because of their remarkably steep execution fees. However, for long-term investors, again, because of their potential profits, this difference is insignificant.

Overall, we can see the spread is our primary trading cost; the mark-up brokers apply to provide liquidity as quickly as they do. For some, this fee might be minute, while it can make a dent in their potential rewards for others.

For this reason, we have the luxury of both fixed and variable spreads to cater to both groups. Most traders prefer to stick with the major and minor pairs to reduce these costs since these markets boast the most demand and trading activity.

However, it does not necessarily mean some exotics aren’t worth trading, at least for long-term traders. The difference is they will need to shop around for better spreads because, unlike the other markets, we may see noticeable differences between brokers as these are less-traded pairs.