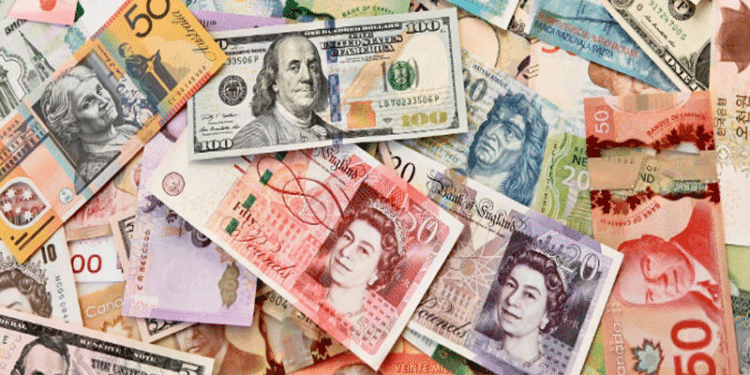 Forex is the biggest financial market globally by a country mile, dwarfing even the US stock markets by several trillion traded daily. The top 10 most traded forex pairs closely resemble the top 10 largest economies globally such as those from the United States, China, Japan, Germany, the United Kingdom, and Canada.

For any investor, it’s good to know which currencies are traded the most in the markets. Greater liquidity tends to equal quicker profits. As expected, the dollar is dominant in forex being the reserve currency for many large financial firms worldwide. Many daily international transactions are in USD as well.

Much of the trading action happens in financial centers based in the United States, followed by those in the Eurozone (EUR), Japan (JPY), the United Kingdom (GBP), Australia (AUD), Canada (CAD), and Switzerland (CHF). We know the six currencies of these respective nations’ as the major pairs, which naturally make up the 6 of the top 10 traded currency pairs. Major pairs are those currencies paired against the US dollar where each currency originates from a leading first world country.

In the table below, surprisingly, there are a few exotic pairs. Typically, these pairs reflect currencies of countries analysts consider to be developing, though the countries in this top 10 are all technically very developed nations. Nonetheless, we still refer to them as exotic pairs since they exhibit different characteristics structurally and are thinly traded compared to their counterparts.

Looking at the numbers below, it’s interesting how much capitalization each pair carries.

EUR/USD: One of the prevalent major pairs, EUR/USD is the most-traded forex currency pair, as evidenced by its approximate market cap. In this pair, the indication is how many US dollars (USD) are needed to buy one euro (EUR). EUR/USD has the cheapest spread in all forex markets due to the number of market participants trading the pair. Some of the significant drivers for EUR include the GER30 index.

USD/JPY: This pair expresses the number of Japanese yen (JPY) needed to buy one USD dollar (USD). Like many major pairs, USD/JPY has low spreads, relatively stable and liquid market movements. Some of the big drivers for JPY include the NIKKEI 25 index.

GBP/USD: Though this pair only takes the third spot in the ranking, GBP/USD is technically one of the most liquid currency pairs in terms of price movements. The pair comprises the British pound (GBP) and the US dollar, where the relationship denotes the number of dollars required in buying one pound. GBP/USD often has a positive correlation with EUR/USD.

AUD/USD: This pair consists of the Australian and US dollars where the relationship expresses the number of US dollars (USD) required to purchase one Australian dollar (AUD). As one of the world’s largest gold exporters, the price of gold is considerably correlated with the Australian currency, though, of course, not just limited to this market.

USD/CAD: This pair comprises the US and Canadian dollars, where the pairing expresses the number of Canadian dollars (CAD) needed to buy one US dollar (USD). As one of the world’s largest oil producers, the Canadian dollar has a close connection with the price of oil, among many other instruments.

USD/CHF: This pair consists of the US dollar and Swiss franc and is an expression on the number of Swiss francs (CHF) needed to buy one US dollar (USD). Historically, USD/CHF has shared very resembling market movements with EUR/USD (negative correlation) due to the bond with the GER30 index /DAX.

USD/CNH: Taking the 7th spot on the list, USD/CNH is an exotic pair comprised of the US dollar and the Chinese yuan that expresses the number of Chinese yuans (CNH) needed to buy one US dollar (USD). On the one hand, we’d expect for NZD/USD to be number 7. However, China’s place on this spot exemplifies the growing influence they’ve been gathering economically worldwide. They have the second-largest GDP globally at about $14 trillion. Several indices drive China’s currency, such as the Hang Seng Index (HIS) and the Shanghai Stock Exchange Composite Index (SSECI).

USD/SEK: Another exotic pair entrant, USD/SEK denotes the number of Swedish kronas (SEK needed to purchase one US dollar (USD). The Swedish currency often mirrors the movements of its Scandanavian counterparts (Denmark and Norway) and its currencies, DKK/USD, and US/NOK, respectively. These collectively are one of many drivers for the krona.

USD/MXN: USD/MXN denotes the number of Mexican pesos (MXN) needed to buy one USD dollar (USD). This pair makes for a fascinating case to be in the top 10 for a few reasons. Exotic currencies are known to offer slightly higher interest rates for carry trade purposes, which include the Mexican peso. Another reason why this currency gains momentum would be due to the crude oil relationship between the United States and Mexico.

NZD/USD: NZD/USD denotes the number of US dollars (USD) needed to buy one New Zealand dollar (NZD). For the most part, this major pair mirrors much of AUD/USD since both originate from the Australian continent.

Seeing more statistical data gives one an idea of which pairs they should be following closely. At the very least, an ideal mixture or portfolio has to include all seven major pairs, all of the cross pairs, and a few of the exotics on this list.

Using a Trend Filter To Befriend the Trend in Forex