CPI, PMI and Their Impact on Forex 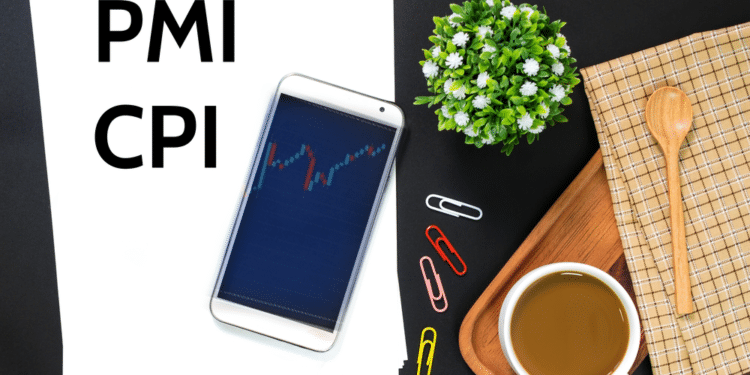 Consumer Price Index and Purchasing Managers Index are some of the most impactful metrics for governments, businesses, and Forex participants.

Regulators such as central banks conduct monetary policies based on CPI data in particular.

Economic indicators help traders to navigate the forex markets in various ways. Long-term investors can gain meaningful insights into the economy, analyzing the dynamics of CPI and PMI, thus being able to base their decisions on objective data.

Short-term traders exploit the data releases to profit from the immediate market’s reaction and the proceeding momentum.

Let’s look closer into these metrics and how we can use them in Forex.

PMI (Purchasing Managers Index) is an index that measures the activity levels of different manufacturing firms in an economy. Its main components include inventory volumes, new orders, and employment figures, among others.

PMI is usually realized on the first day of every month in most countries. However, some countries release their figures every quarter. The data is used as an indicator of whether factory activities have risen or reduced during the review period. Investors depend on this indicator because it helps them assess whether an economy is likely to expand or contract.

The index is measured on a scale of zero to one hundred, with 50 being the mean reference point. A reading below 50 tells us that the economy is likely to have contracted, while a reading above 50 indicates growth.

In addition to 50, the other significant point of reference is 42.0. A reading above 42 indicates that the economy is on a growth trajectory, while a figure below this point signals a looming recession. Generally, the gap between 50 and 42 tells us the level of expansion in an economy.

With changes to the PMI, forex traders can decide whether to keep holding a currency or sell it. A favorable PMI figure indicates that an economy is growing, and, therefore, its main currency is likely to strengthen.

Conversely, when the PMI  is below the critical thresholds or if it reduces significantly from the previous reading, it is an indication that an economy is doing badly and the currency of the affected country is likely to weaken.

The biggest criticism of PMI is based on the fact that it mostly incorporates figures from the manufacturing and services sectors. Therefore, it is not a true measure of the GDP because it does not include the contribution of other sectors. In addition, different sectors contribute differently towards the total GDP.

For example, in some economies, the construction and services sectors may contribute more towards the GDP than manufacturing. For this reason, some countries have different PMI releases to reflect the contributions of different sectors to the economy. Therefore, services PMI may not be as significant in a country whose economy is largely reliant on manufacturing.

Consequently, forex traders have to adjust accordingly to such dynamics. For instance, a disappointing manufacturing PMI may lead to a temporary decline in the value of a currency in a service-based economy. However, a positive services PMI release thereafter is likely to lead to a recovery by the currency.

In the chart above, we can see how EURUSD reacts to the announcement of the manufacturing PMI for the United States on February 1st, 2020.

Consumer Price Index (CPI)  is an economic indicator that measures consumer behavior in an economy by assessing whether there has been a rise or a decline in the uptake of goods and services by consumers.

In essence, it tells us whether there has been a rise or a decline in the prices of consumer goods and services. By assessing the level of inflation for consumables, CPI enables countries to adjust their monetary policies accordingly in order to prevent the economy from overheating.

Rising inflation is bad for the strength of a currency because it weakens its purchasing power. Therefore, to tackle this, central banks usually raise interest rates as a way of reducing borrowing and mopping up excess liquidity. For forex traders, an indication of rising inflation from CPI data usually prompts them to sell the country’s currency.

The more effective a government policy is in response to CPI data, the more forex traders rely on such policies in future response to inflation.

How to integrate CPI in trading forex

CPI data is usually released monthly or quarterly. With this knowledge in their minds, traders usually respond to the data depending on whether it met, surpassed, or performed below projections. Before the release of the data, analysts usually estimate their own projections. After the actual data is released, the market typically trades based on how it compares with the previous projections. It is not uncommon for analysts to miss the mark.

Therefore, it is advisable not to open a position in the few hours leading to the release. That period is typically volatile and may throw you off track, leading to big losses. Instead, it is better to wait and open a forex trading position a few minutes after the release because you will be trading based on known data.

Below is a chart showing the inflation levels in the US across different months of 2018 and 2019. The second chart shows the different levels of the US dollar index during the period shown by the CPI data.

From the two charts, we can see how the US dollar strengthened against the other major currencies ((EUR, JPY, and GBP) when the inflation was low. However, as inflation rose in the first half of  2018 onwards, the dollar weakened before rebounding when the inflation started reducing from August 2018.

Note, however, that other factors often come into play after the release of  CPI data. Therefore, you should only trade with it for as long as it is relevant.

The chart shows movement in the US Dollar Index.

Once the market readjusts, you should look for key levels of support and resistance to guide you on the likely price of the currency. You should also be keen on other relevant market fundamentals.

Consumer Price Index and Purchasing Managers Index are essential economic indicators that impact the strength of currencies. Forex traders can use them profitably by interpreting them correctly and integrating them in their trades in good time.