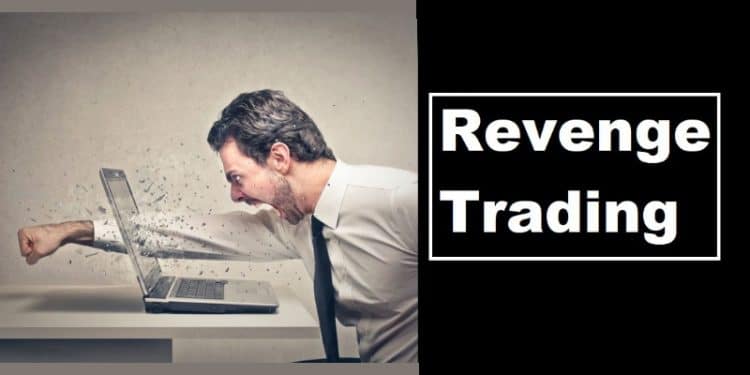 Trading provides a way of making some income on the side, but so does it slam even the brightest minds from time to time. No single trader can claim to have turned a profit with every single trade. What happens after a significant loss determines a great deal if you stay in the game for long. Amidst losses that come calling while trading, revenge trading is a common phenomenon experienced daily.

What is Revenge Trading?

Revenge trading is the practice of taking one or more trades immediately after a significant loss. The play happens when a trader is in a losing streak or incurs a bad beat. A bad beat comes in the form of a trader feeling he or she has robbed a profitable trade.

The irrational trading that happens after a significant loss, or losing streak amounts to revenge trading as it entails chasing trades or overtrading. While the idea is to recover losses incurred, that is not always the case. Most traders end up incurring more losses, given the emotions involved in trying to beat the market rather than accepting what has happened.

Forcing a trade all in the effort of trying to recover losses from a previous trade is a dangerous game. The fact that the practice is caused by wrath, often time’s results in the pilling of losses as trading is usually emotionally driven.

Anger, fear, shame, and greed are the key drivers behind irrational trading behind revenge trading. Contrary to perception, emotional trading is not the precept of novice traders alone. Every trader, regardless of skills or experience, succumbs to the perils of fear and greed.

With anger and greed in control, traders automatically enter trades in the effort of recouping losses after a losing streak. However, revenge trades, most of the time; end up with much bigger losses. Fear and shame have also forced traders into trades that they would typically not enter. The fear of realizing and accepting a big loss is real to the extent of fueling revenge trading.

The fact that losing feels worse than winning feels goods is another reason why some traders fall to the temptation of entering a trade all in the effort or trying to recoup losses incurred. Its human nature to forget the hundreds of successful trades made and to focus on covering one trade that went wrong.

How to Avoid Revenge Trading

Revenge trading is a catastrophic practice that has seen many trading accounts washed down on a simple mistake, which could have been avoided in the first place. Here are some ways to avoid the nudges of entering a trade out of fear, anger, or shame of a big loss.

Trying to be objective and control emotions after a big loss is difficult. Emotions, often, take over and shroud judgment, even the brightest of minds. Likewise, it is essential to take a break out of trading after incurring a big loss. Contrary to perception, one does not make money by being in the market all the time.

Taking some hours off a day or two will go a long way in clearing the mind of what has happened. It is essential to step away from the computer screen to clear the mind, especially after a big loss. What separates successful traders from mediocre traders is how they react after a big loss. Taking a simple break or walk after a loss can make a big difference in staying in the game much longer.

Whenever you incur a big loss and feel like entering a big trade, to recoup the losses, always remember where you have come from and the effort you’ve put in. It would be the perfect time to remember how creating a trading plan, following trends and looking for patterns is vital to having a successful investing career.

Never forget the hours taken to polish a trading strategy and the amount of success in the form of profits it has brought about. Before entering that trade because of anger or shame refocuses by reviewing your trading plan and re-checking the charts.

Trading is all about trying to manage losses instead of winning. Making losses is inevitable, given the different forces involved. Likewise, it is important to come to terms with the truth when it comes to losses. Accepting losses and learning from them is a sure way of having an illustrious career in the trading world.

It is important to write down precisely what happened after a loss or profit. With losses, you should work towards not repeating the same mistake that led to the big drawdown in your account. While sometimes it is not easy to avoid mistakes, recognizing them, and having an idea of their potential impact can make a huge difference.

Following a rule-based trading system is a sure way of staying clear of pitfalls triggered by revenge trading. Trading on its own is tough. Therefore, there is no need to complicate things by trying to be competitive after a big loss.

Whenever emotions such as fear, anger, and greed are the driving force, the probability of making a big mistake leading to a much bigger loss is usually high. After every big loss, it is important to take a back seat and look at what exactly went wrong. Trying to get even with the market or recoup losses many at times leads to worse outcomes.