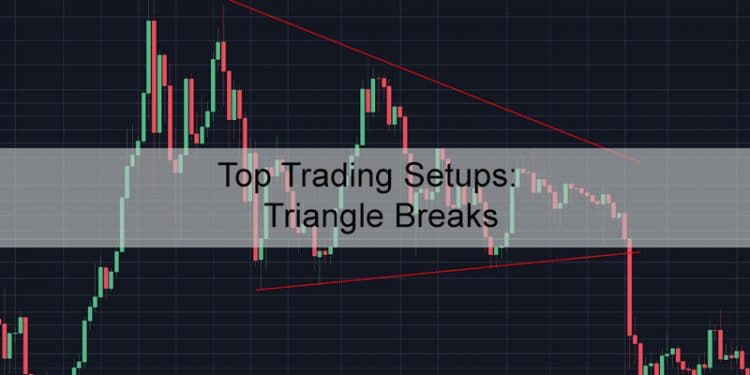 In Forex trading, triangle chart patterns refer to a continuation pattern which involves the price moving to a tighter range as time goes by. It provides a visual display of a battle between bears and bulls. A triangle pattern usually forms when it includes fives touches of resistance and support. For instance, two touches of the support line and three for the resistance line. There are generally three types of triangle chart formations, namely, symmetrical ascending and descending.

In a Symmetrical triangle, the slope of the price highs and that of the price lows converge together to form a triangle. The market makes higher lows and lower highs. A clear trend cannot form because the buyers and sellers aren’t pushing the price far enough. As a result, it forms lower highs and higher lows. The breakout gets near as these slopes get closer to each other. The Trader doesn’t know the direction of the breakout but is assured that a breakout will occur.

In an Ascending triangle, there is a clear resistance level and a slope of higher lows. In this situation, buyers cannot exceed a certain level but are gradually starting to increase the price by the higher lows. The buyers keep on putting pressure on the resistance level till a breakout is bound to occur.

In a Descending triangle, a string of lower highs forms the upper line with the lower line forming a support level in which price does not seem to break. The price makes lower highs which indicates that the sellers are starting to gain ground against the buyers. The price eventually breaks the support line and continues to fall.

Triangles are similar to pennants but possess no flag pole. In other words, the price action is more gradual in this case. They can lead to extremely profitable and clean breakouts. When a trader believes that there is a strong trend, they can look for triangles and jump on them.

Among the forex trading community, triangles attract attention because they are logical to trade and easy to spot. Price consolidations that have higher lows and lower highs form triangles on charts. When these triangles break, they can indicate either a continuation of a reversal or the trend.

The above is a standard triangle formation and breakout for the daily USD/JPY chart from January 2013 to January 2014. From April 2013 to October 2013, one can see that the USD/JPY consolidated. It made higher lows and lower highs until finally breaking through the top of the triangle. It ultimately made a run for the 100.00 marks, hence forming a classic example of a triangle consolidation and breakout.

There is a second derivative of the broken triangle setup that is equally powerful. This scenario usually occurs when the triangle breaks in one direction and then fails to do so. It turns back through the triangle in the opposite way. Traders who are waiting patiently for the triangle to break, enter at this moment. They need to stop out when the pattern fails. This concept is similar to the Slingshot Reversal. In both cases, there is a clear pattern, a break out that fails, and finally rapid momentum in the opposite direction.

The above is the daily AUD/USD chart for November 2010 to March 2011 and is a nice triangle breakout to the downside. However, the chart below shows us what happened next.

The above is the daily AUD/USD chart for December 2010 to May 2010, with a failed triangle reversal. This is a classic triangle break followed by a reversal that is very impulsive. Traders who are bullish on the AUD/USD can see this triangle setting up. They will play the breakout to the topside, based on the standard triangle breakout concept.

They are some key things traders have to remember when trading with triangle patterns in the forex market. Traders have to always be cognizant of the trend’s direction before the consolidation period. They can identify triangle patterns forming by making use of the upper and lower trendlines. To mitigate the risk of a false breakout, traders should adhere to sound risk management practices. This will ensure that they maintain a positive risk to reward ratio on all trades.

EUR USD: How to analyze the most liquid forex pair