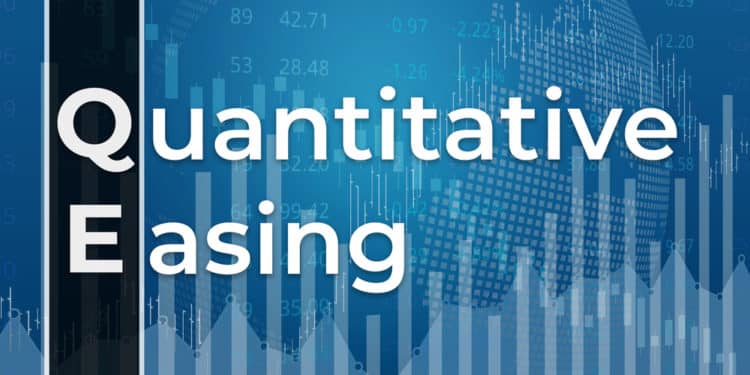 Quantitative Easing (QE) is the purchase of assets by a nation’s central bank from the domestic banks with the aim of improving economic productivity. The most common asset involved in QE transactions in long-term securities. In return, the banks are usually expected to channel the liquidity obtained into the economy through increased and cheaper lending.

In essence, when commercial banks have more money in their vaults, they give out loans with relative ease. Importantly, they give them at reduced interest rates, which incentivize borrowers to take up more loans. When there is more money in the economy, it triggers increased spending and bolsters economic productivity.

Financial markets are often used as the barometer for economic output. When central banks notice widespread panic or gross underperformance by these markets, they quickly swing into action. Once they establish that the economy is in a general decline, they often turn to QE as an intervention measure.

During times of economic underperformance, many people are often driven by fear of losing their jobs. This often results in reduced spending, which ultimately impacts negatively on the economy. Businesses also feel the impact of widespread frugality when they notice a decline in the number of consumers they have. Eventually, they’ll go into the red and be forced to reduce staff.

The normal course of action for central banks would be to lower interest rates in an effort to improve the economic situation.

With lower interest rates, you earn less on your funds held in a bank, making saving less appealing than spending it. And because interest rates are lower, borrowing money is less expensive, making it easier to finance major purchases like a new home or a new car.

In order to keep the economy thriving and safeguard jobs, people must buy items, and companies must invest money.

The only problem is that interest rates can at times be so low as to be ineffective when additional reductions are needed.

QE has been popular among several central banks because of this. In this approach, spending and investment are both encouraged.

How does QE work?

As central banks like the Fed purchase bonds and other securities, they give banks extra cash, which they can then lend. In addition, the reserve threshold may be lowered to ensure that commercial banks have more room to lend out money.

By reducing the reserve level, banks are able to extend more credit. More money in the country boosts the money supply, allowing interest rates to decline. As mentioned above, when commercial bank interest rates reduce, consumers are more inclined to borrow. The ripple effects of this are then felt by the overall economy because of increased liquidity.

In addition, after the market has stabilized, QE runs the risk of inflating asset prices, benefiting only a small portion of the population. Also, this approach comes at a high cost in terms of increasing income disparity.

Quantitative easing has proven effective as a monetary policy tool and is likely to continue being used for years to come. Nonetheless, it has some downsides that policymakers and investors should be aware of and institute appropriate actions to offset them.