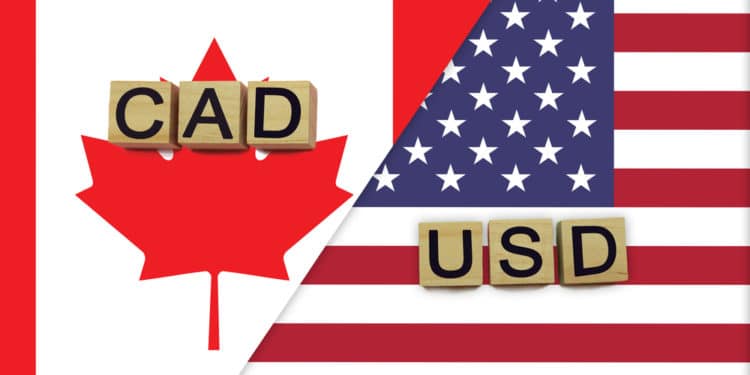 The USD/CAD pair dropped on Friday after Canada delivered relatively strong economic numbers and as the US dollar declined. The pair was trading at 1.2760 on Friday afternoon, which was lower than the weekly high of 1.2880.

The USD/CAD dropped after the latest Canadian GDP numbers. According to the country’s statistics office, the economy expanded by 0.7% in November after rising by 0.4% in the previous month.

Economists polled by Reuters were expecting the data to show that the economy rose by 0.4%. The bureau cited strong personal consumption, higher oil prices, and higher government spending for the recovery.

Further data by the bureau showed that the raw materials price index (RMPI) rose by 3.5% in December after rising by 0.6% in November. This led to an annualised contraction of about 0.7%, which was also an improvement from the previous 1.7%.

Additionally, the Industrial Product Price Index (IPPI) rose by 1.5% in December and an annualised rate of 1.8%. These numbers show that the Canadian economy was doing relatively well in the fourth quarter.

On Friday, the USD/CAD also fell because of the relatively higher crude oil prices. The price of West Texas Intermediate (WTI) rose by more than 1.2% to $53 while that of Brent rose by more than 1.32% to $55.81. These numbers are important for the Canadian dollar because Canada is the fourth biggest oil producer in the world after the United States, Saudi Arabia, and Russia. Therefore, higher prices usually leads to more foreign exchange.

The USD/CAD declined because of the weakness of the US dollar. In total, the dollar index fell by more than 0.10% on Friday in part because of the rising risks in the United States and profit-taking since the greenbuck gained in January.

The US published relatively mixed economic numbers this week. On Thursday, data showed that the economy increased by 4.0% in the fourth quarter. This was lower than the previous quarter’s expansion of about 33.4%. However, it was in line with expectations.

On Thursday, data from the US statistics office also showed that new home sales increased by 1.6% to 842k. And on Friday, numbers showed that personal incomes rose by 0.6% while personal spending declined by 0.2%.

These numbers came at a time when there is a debate in Congress about stimulus. While Joe Biden is pushing for a $1.9 trillion package, some moderate members of his party and Republicans want to make some tweaks. As such, economists expect that the final bill will be dropped to about $1 trillion.

The USD/CAD pair shows that the USD/CAD pair formed a Doji on January 21. The lowest point of this doji was at 1.2590. It then bounced back and reached a high of 1.2180 on Friday before it pared back some of these gains. The price is still above the Ichimoku cloud and has moved below the 25-day weighted moving average. Therefore, in the near term, the pair will possibly fall as bears target the next support at 1.2683. A move above1.2840 will invalidate this trend.

USD/MXN: US Dollar to Strengthen Post-NAFTA