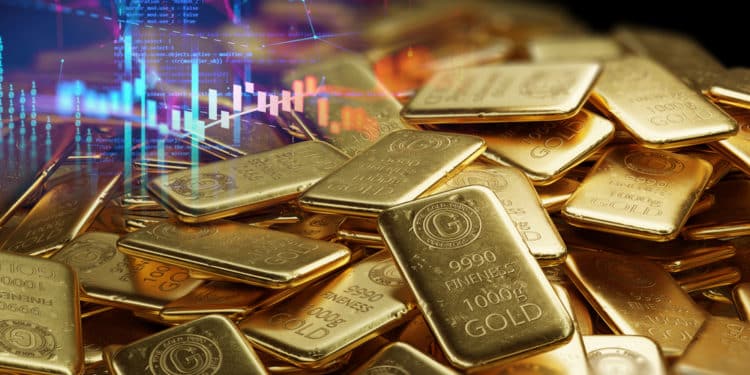 The gold price has edged lower in Tuesday’s session, even as it remains within the horizontal channel that defined its movements in the past week. The three-day Memorial Day holiday in the US, which ended on Monday, explains the decline in liquidity at the start of the week. Indeed, the gold price will likely remain range-bound until a fresh catalyst emerges later in the week in the form of the scheduled economic data.

On Monday, the dollar index dropped to $101.41, its lowest level in five weeks. In Tuesday’s session, it has bounced off those lows to trade at $101.71 as at the time of writing.

As is the case with other commodities, the gold price tends to move inversely to the value of the US dollar. The recorded dip in the greenback has made it less expensive for the gold buyers holding other currencies, an aspect that has offered support to the precious metal.

Even so, I expect its gains to remain curbed in the short term as the strength of the US dollar persists. While it has dropped from the 20-year high of $105.04 it hit close to three weeks ago, it remains above the psychological level of $100. Prior to 8th April, this crucial zone had been evasive for about two years.

On the economic data front, the gold price will be reacting to the US consumer confidence figures scheduled for release later in Tuesday’s session. About two weeks ago, the University of Michigan’s sentiment index came in at 59.1, down from April’s 65.2. Indeed, the reading is the lowest since 2011 amid concerns over heightened inflationary pressures.

The CB consumer confidence data comes in days after the PCE price index showed that price pressures may have peaked, an aspect that has improved the overall risk sentiment. Indeed, the risk-on mood has boosted the stock market while lowering the demand for gold and other safe-havens. For instance, Dow Jones has extended its gains to trade at a four-week high at $33,212,97. S&P 500 is also up by 2.47% at $4,158.23.

The rebound in Treasury yields is also behind gold price’s range-bound trade. The benchmark 10-year US bond yields is at 2.82%, having bounced off Friday’s low of 2.70%. Later in the week, the precious metal is also set to react to the US jobs report. In particular, the nonfarm payrolls and unemployment rate are scheduled for release on Friday.

As was the case in the past week, the range between 1,840 and 1,865 remain a crucial one in the new week. Indeed, the precious metal has continued to find resistance at the range’s upper border over the past two sessions. As at the time of writing, it was at 1,854.28.

On a daily chart, it is still below the 25 and 50-day exponential moving averages. In the short term, I expect the gold price to remain within the aforementioned horizontal channel.

As the week unfolds, the bulls may get an opportunity to rise further to 1,877, which is along the 50-day EMA. On the flip side, a rebound in the US dollar may yield a pullback past the range’s lower border to find support at 1,825. As shown through this forecast, I expect the gold price to remain steady above the psychologically crucial zone of 1,800.