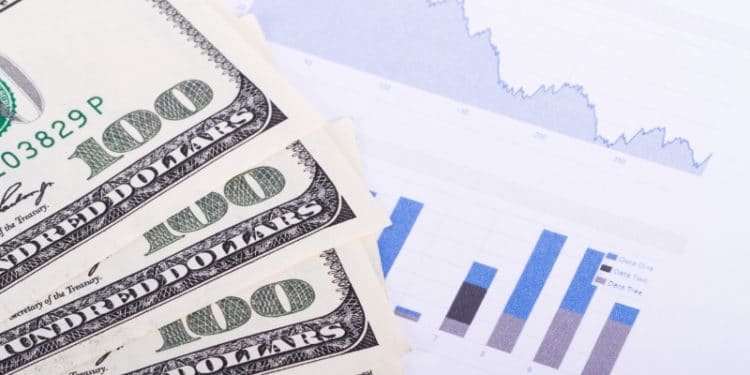 A dovish tone from the Federal Reserve was the last thing the dollar needed, having hit strong resistance at three-month highs. The Australian dollar regained its bullish momentum amid the dollar weakness, having also boosted solid employment data. The British pound also powered through to one-week highs awaiting the Bank of England report as the euro also shrugged off initial concerns about rising European yields to rally.

The greenback weakened across the board as the FED chair Jerome Powel painted a dovish tone on the policy front. After powering to three-month highs, the dollar has seen limited upside action in recent weeks as traders shifted their attention to the FED.

Amid the sell-off, the greenback remains bullish as it continues to hold on to gains above the 91 handle against the majors.

The FED said it was not in a rush to raise interest rates until 2023 was the blow that triggered weakness in the greenback sending it to its lowest level in two weeks. The market was expecting the FED to hint at the possibility of rate hikes starting next year.

However, that was not to be, as the central reiterated it would pull back its stimulus given the strong economic recovery. Dollar sell-off was curtailed by the FED, predicting the economy would grow by 6.5% in 2021, the largest annual GDP jump since 1984. Likewise, it expects inflation to hit the 2.4% mark above the 2% target.

Following the FED disappointment, the forex market’s focus shifts to the Bank of England, another central bank poised to outline its policy framework on Thursday. The BOE is widely expected to leave the interest rate at historic lows of 0.1%. The bond-buying program is also likely to remain intact as it has been one of the catalysts fuelling a bounce back following the COVID-19 contraction.

The British pound has in recent days tried to edge higher, taking advantage of the dollar weakness. The BOE report will have a significant impact on the pound bullishness experienced in recent weeks. The pound has continued to strengthen across the board on traders remaining optimistic about economic recovery thanks to the aggressive COVID-19 vaccination drive’s impact.

On the other hand, the Australian dollar is not holding back despite the Reserve Bank of Australia’s disappointing early in the week. The central bank raised concerns about the economy’s employment sector.

The Aussie has shrugged off the concerns rallying to two-week highs on an upbeat job report. The report shows the economy added 88,700 jobs in February, more than double a 30,000 increase expected. The unemployment rate also improved significantly, with the rate dropping to 5.8% against 6.3% expected and 6.4% prior.

The AUD strengthened against the dollar as traders remained bullish given the V-shaped recovery experienced in the labor market despite the RBA concerns.

The New Zealand dollar is another commodity currency to reclaim its upward momentum at the back of the dollar weakness. The NZD/USD is back to two-week highs despite economic data showing that the economy suffered a significant decline in activity in the fourth quarter. Electronic transactions falling in January and February raise concerns about the economy’s health, pointing to another recession.

The forex market’s focus will also be on the Bank of Japan as it is set to table its March report on Friday. The report comes at the back of the economy feeling its biggest contraction in recent history owing to the disruptions caused by the COVID-19 pandemic.

The yen has weakened significantly against the dollar depicted by the USD/JPY pair touching nine-month highs in recent weeks. Concerned by the economic contraction, the Japanese government has decided to end the state of emergency in the Tokyo area, which caused a significant slowdown in economic activities.

Away from the forex market, Gold is on the front foot in the wake of the FED casting doubts on interest rate hikes anytime soon. The yellow metal is up to three weeks highs on the FED dovish performance, as well as jitters about COVID-19 vaccines.