How to Trade with “Kagi” Charts in the Forex Market

by Adam Stanley
in Technical Analysis
0 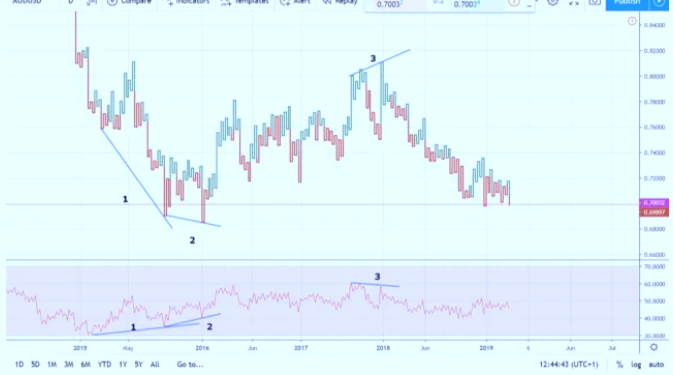 There are several charting and technical analysis techniques that concentrate on the important moves that act as drivers behind a trend of any asset, filtering out noise in the process. One such chart is called the Kagi Chart. Initially used in the 1800s in Japan, Kagi Charts are used for discounting the time seen on a regular price chart. Kagi charts are time-independent, unlike candlesticks and bar charts, and display the potential supply and demand level for any particular asset.

Many traders tend to view Kagi charts as a critical component when using price action. They only reveal the price changes that matter, filtering the noise in the market. In other words, it tracks the price movement of the market, considering only one variable, the price.

Kagi charts can be used in a way to make the most of any market and ride trends. At a glance, the Kagi chart looks almost like a snake, consisting of a line that rises and falls on the screen. It should be known that Kagi charts are just a newer variant of time-independent charts from Japan. Kagi charts account only for the relevant price action and as a result, it filters for the specific days when price moves less than the minimum distance needed.

When the price exceeds a predetermined distance, Kagi charts plot a new value. This distance varies according to the nature of the market. It should also be noted that Kagi charts originated in Japanese rice markets where price movements followed specific patterns. This environment was much different than the currency markets of today.

The nature of the modern currency market is that it consists of multiple pairs. The price action of each currency pairs differs from each other, with some pairs possessing an extended price range on a daily basis, while other pairs are known for consolidating more. Thus, Kagi charts would not be relevant if the trader uses the same pre-determined price change for all markets, as each market possesses its own unique characteristics.

Before diving into how traders can use Kagi charts to trade in financial markets, it should be known that Kagi charts are not commonly available on all trading platforms. For instance, Meta Trader 4, one of the most popular trading platforms among retail traders, does not offer Kagi charts by default. However, a trader may import a custom indicator and use it to build a Kagi chart, which usually comes at a cost and does not possess the default settings. Even other platforms such as TradingView charge a cost for using Kagi charts in lower timeframes that show price action.

How to Ride Trends with Kagi Charts?

When applied to Kagi Charts, trend lines can be better used, as Kagi charts show relevant market moves. We will take the example of a GBP/USD price action since 2014.

Here, the bearish trend suffers a false break which is easily filtered by the trendline. In the chart, we see that the “shoulder” reverses and closes below the trendline level, notifying the traders that the trend remains intact. The price has tried to break the trendline twice in a row but failed miserably in both instances. In the end, we see that the price eventually breaks higher, which is signified by the “shoulder” ending above the bearish trendline. Even if it lags a bit, it helps the trader remain in the relevant trend.

Thus the following points can be summarised about how the Kagi chart can help a trader.

Trading divergences are one of the most popular ways for traders to trade with oscillators. They can always rely more on what the oscillators show as compared to what price tells them. This is because oscillators consider multiple periods before plotting a value.

The oscillator’s information is considered more important in the case of Kagi charts. An oscillator placed on a regular candlestick chart normally uses a standard period. For instance, it’s 14 in the case of the Relative Strength Index.

In the case of the Relative Strength Index, the oscillator checks the previous 14 candlesticks on the main chart. The RSI formula is then applied, which finally plots a value based on the result.

However, in Kagi Charts, the formula is applied on the specific periods where price movement occurred according to “Kagi’’ rules. Thus, the period involved, which starts from 14, can expand in time to much more than 14 days.

On the above AUD/USD daily chart, the RSI (14) is shown. Here, however, the RSI doesn’t consider the last 14 trading days, instead of focusing on the last 14 days where the Kagi charts changed. On the chart above, the RSI values indicate that the price reached oversold conditions only once between 2015 to 2019. Thus, it is irrelevant for a trader using Kagi charts to wait for oversold or overbought conditions.
In this situation, it makes more sense to use divergences. As it filters the market noise, Kagi divergences are much more powerful than regular divergences.

In the 21st century, building Kagi charts have become simple. However, traders should know how to correctly interpret them and know what they stand for, before attempting to trade with them.

The Best Combinations of Forex Indicators for Day Trading