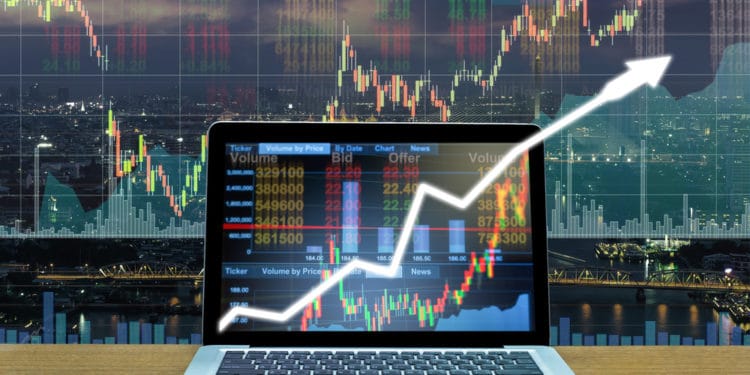 Equity markets kick-started the week with an upbeat tone after a massive sell-off the past week. Major indices were trying to hold on to gains registered on Friday, as the S&P 500, the Dow Jones, and the Nasdaq Composite rose 1.95%, 1.85%, and 1.55%, respectively, on an impressive Non-Farm Payroll report.

The NFP report indicated that the US economy added 379,000 jobs in February, more than double a baseline forecast of 182,000. The service sector registered the biggest rebound, helped by easing COVID-19 fears. The report once again affirmed ongoing recovery in the US economy that appears to have received a significant boost amid an aggressive vaccination drive.

Likewise, the futures market was up on Sunday evening as investors reacted to the $1.9 trillion stimulus package’s passing. The Dow Jones Industrial Average was up by more than 100 points or 0.55%, with the S&P 500 rallying 0.4% as the Nasdaq 100 remained flat.

Asian shares were also up on Monday morning as the dollar held firm at three-month peaks in response to the passing of the $1.9 trillion massive stimulus pack in the US. With the stimulus raising hopes of accelerated economic recovery, the MSCI, the broadest index of Asia Pacific shares, rose 0.4%, with the Japanese Nikkei index gaining 1.2%.

Treasury yields have been on a fine run in recent weeks, rallying to one-year highs. Having started the year below the 1% mark, the yield has risen to 1.62% amid growing confidence about the accelerated economic recovery.

Rising Treasury yields continue to put pressure on the equity markets on putting pressure on valuations. The most expensive stocks are the most affected by their valuations, having reached nosebleed valuations in the recent months.

Likewise, the bounce back experienced with the passing of the stimulus package might be short-lived. According to Morgan Stanley, Mike Wilson, the equity markets’ turnaround does not signal the weakness experienced in the recent weeks is over.

The bull market looks set to remain under pressure, with value and cyclical leading the way. Stocks are only expected to bottom out from the current bearish wave once the valuation correction and repositioning are over.

Oil prices rising in recent weeks on optimism about global economy opening and recovery are once again keeping up with the upward momentum. Brent oil futures breached the $70 barrier mark for the first time in more than a year as a Saudi Arabia oil facility came under attack.

Oil prices rose amid growing concerns about oversupply as the Yemeni Houthi forces fired drones and missiles targeting the Saudi Arabian oil industry. One of the facilities targeted is the Ras Tanura, capable of exporting about 6.5 million barrels a day.

Even as oil and other industrial metals continued their ascendance, the same cannot be said about gold. The precious metal has come and remains under pressure amid the rising yields. A strengthened dollar has been the catalyst fuelling a drop below the $1,700 an ounce level in the last few days.

While gold has regained the $1,700 an ounce level, it remains vulnerable and susceptible to further declines as the dollar continues to strengthen across the board.