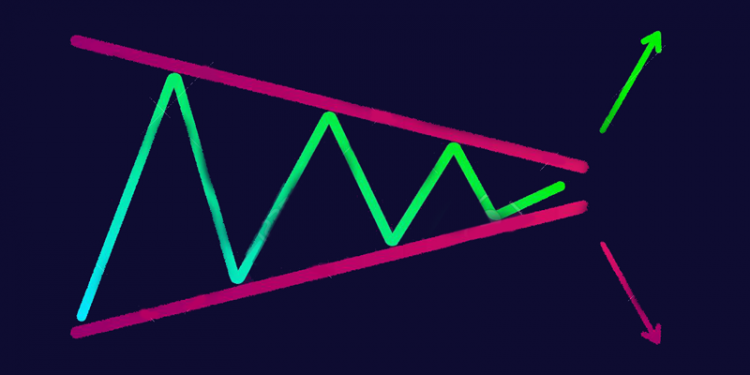 Almost every modern retail forex trader knows about the importance of trading with chart patterns. It is an essential aspect of conducting technical analysis and involves many different chart patterns that help traders read the data.

Traders conduct technical analysis across almost every type of market and on any timeframe. However, they work specifically on freely traded markets. This means that technical analysis may fail to work when regulators intervene such as central banks across countries. Yet even under such circumstances, traders who use charts have an advantage. They can still stick to the patterns and apply money management rules.

There are several types of charts that are used by traders worldwide. However, in this article, we discuss fifteen of the most common types of charts available. These will be categorized according to certain groups as mentioned below.

One of the most common types of charts used by retail forex traders is triangles. There are several different variants of triangle charts, as explained in brief below.

Both Ascending and descending triangles are called so because of their shape and have one thing in common: both of them reveal powerful price action. In this case, the price builds energy to either break higher or lower in case of an ascending or descending triangle respectively. But the price action revolves around the horizontal base which is a key element to these types of triangles.

For an ascending triangle, the dips don’t break the series of higher lows that are formed. On a breakthrough, traders should always go along with a stop-loss at the last higher low. The target should be three times the initial risk taken. The opposite is true for the Descending triangle.

There are certain types of triangles that resemble a “head and shoulders” pattern which will be discussed later. It forms at the end of trends, forms at tops and bottoms and is a powerful pattern. However, very few consider it being a triangle that reverses a trend.

Wedges are another form of popular forex chart patterns and are divided into two types: rising and falling.  Falling wedges have a bullish characteristic as the price explodes higher after the resistance is broken on the upper trend-line. Similarly, rising wedges possess a bearish characteristic and the price is bound to fall by the time it breaks into lower trend-line.

Risings and falling wedges are usually considered by traders to be reversal patterns. When trading with these chart patterns, traders have to consider the following:

10. Head and Shoulders as Continuation patterns

Diamond formations show continuation and are characterised by being almost vertical and a spike higher in a bullish pattern. The price drifts lower afterwards, until reaching the edge of the diamond, where the real break comes in.

The hammer is a type of single candlestick pattern where a pin bar appears at the bottoms of the chart. The chart reinforces its reversing power, when forming at the lowest point of an inverted head and shoulders pattern.

The Doji candlestick is another single sided candle stick chart pattern with little or no real body. It signals that the end of a trend is imminent and is considered also as a reversal pattern. A Doji at the top of a rising wedge can reinforce its bearish bias.

Morning and evening stars are a three-candlestick pattern. Their power increases exponentially when traders combine it with classic technical analysis patterns.

The above are just some of the patterns used by traders in the forex market. It should be known that while using any chart patterns in forex, using proper risk reward ratios are mandatory.