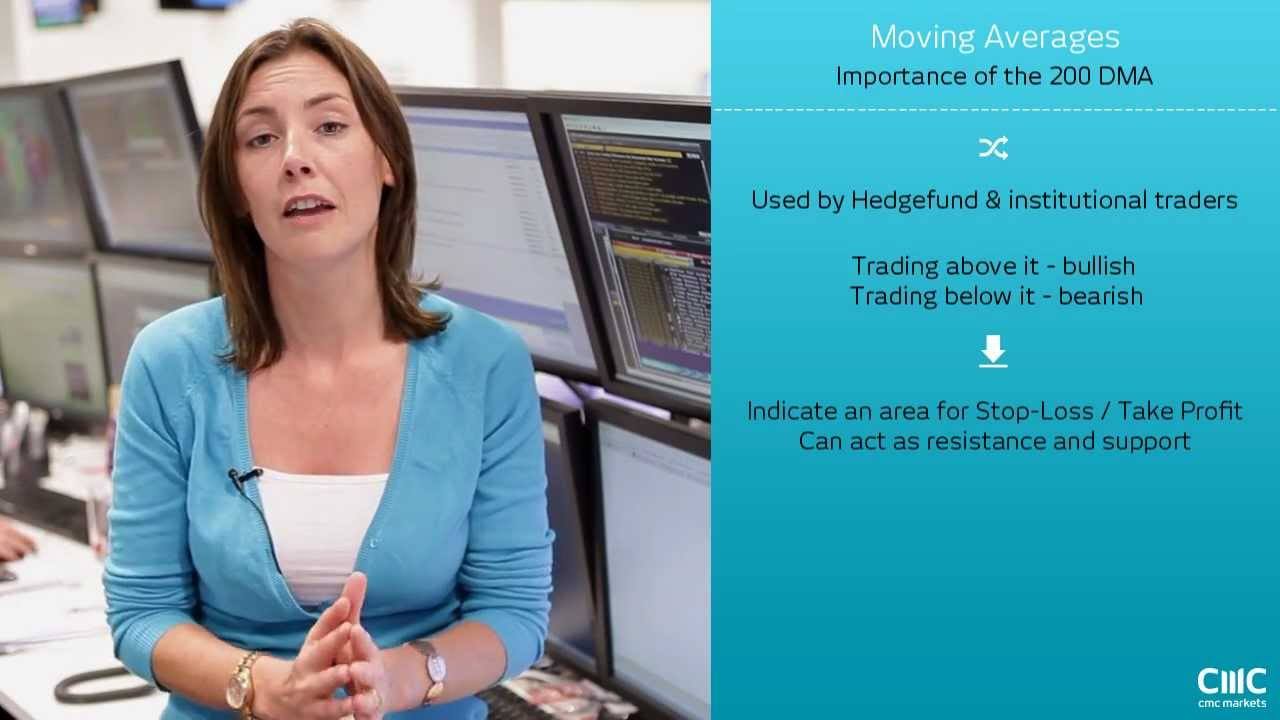 Moving averages also called MAs in short, are the most widely used and oldest technical indicator used by traders because of its simplicity in both construction and uses.

It is among the “Lagging indicators” as it provides signals or direction of the price after a significant change in that direction.

Moving averages are very effective in the case of trend analysis as this indicator dampen short-term fluctuations and smoothen out the price so that a trader or analyst can focus on major or long-term price movement, due to this laggard.

It is also a very popular indicator as its signals are simple, clear and easy to understand. 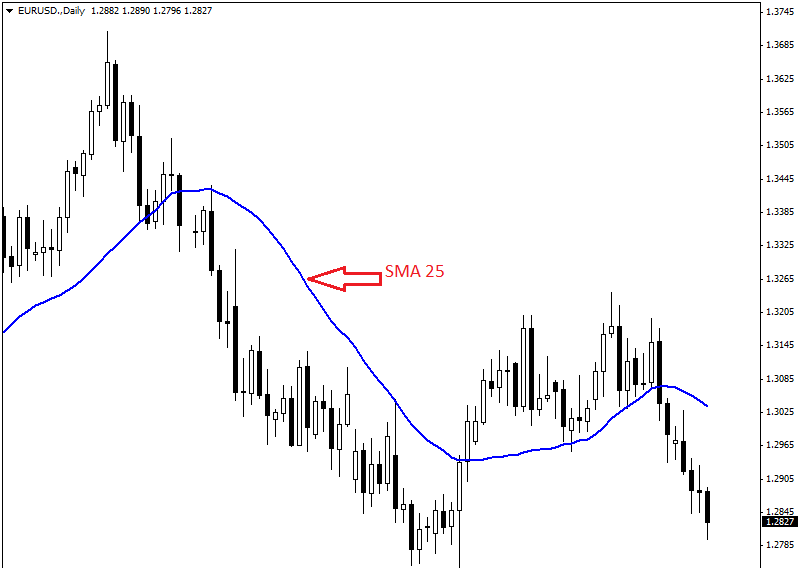 Exponential Moving Averages also knew as EMAs. This type of moving averages designed and developed to reduce the lag or delaying nature of SMA by applying more weight on most recent price or data.

Then you can calculate the exponential moving average using simple moving average and weighting multiplier which you have calculated before. All three steps of calculation would be like this,

Here is an example of EMA in the chart given below, 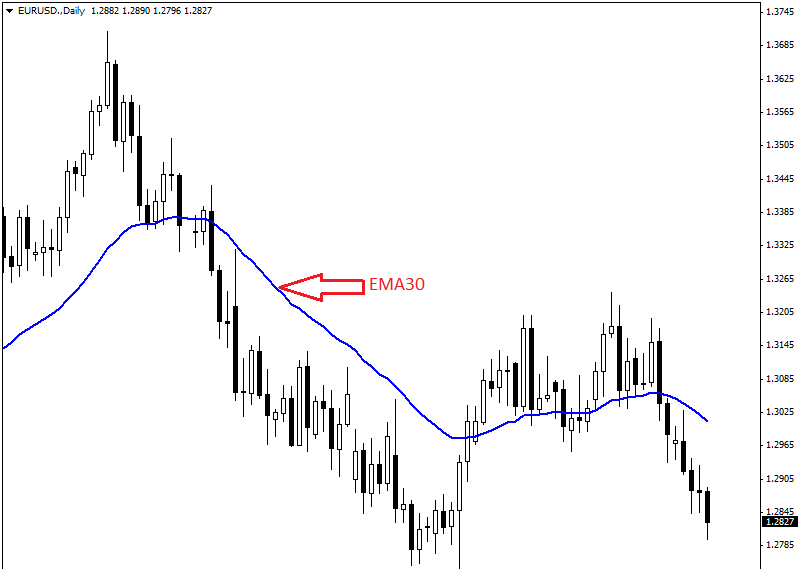 In the chart above, the blue colored line is 30 day’s exponential moving average (EMA30) on the daily chart of EUR/USD. 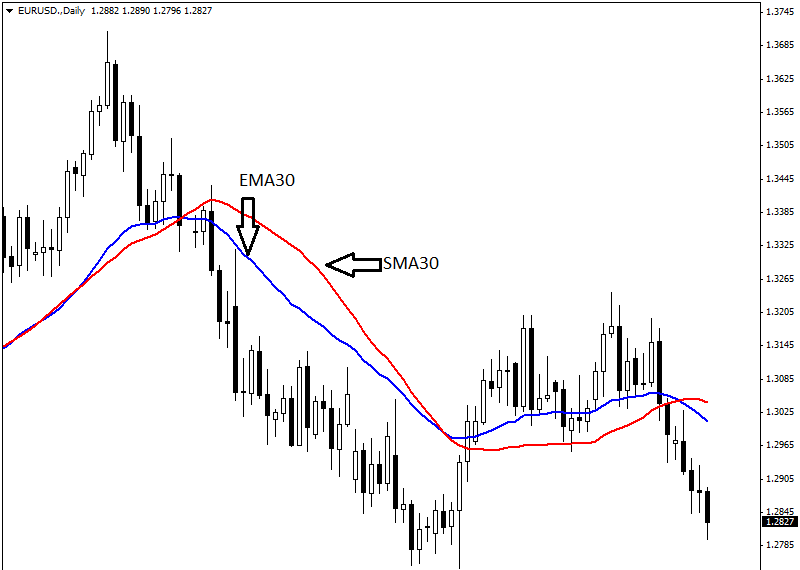 This means EMA is faster and choppier than SMA. Thus, SMA is lazier but smoother than EMA. Both SMA and EMA are an effective tool. It depends on the trader who has to choose the type and period of moving average he/she will use depending on his/her trading style.

Moving averages can be used for various reasons. Such as,

There is no valid trend (flat trend) if price or candle is in a range with moving average, and the moving average is flat. All these situations have shown in the chart of daily EUR/USD given below. 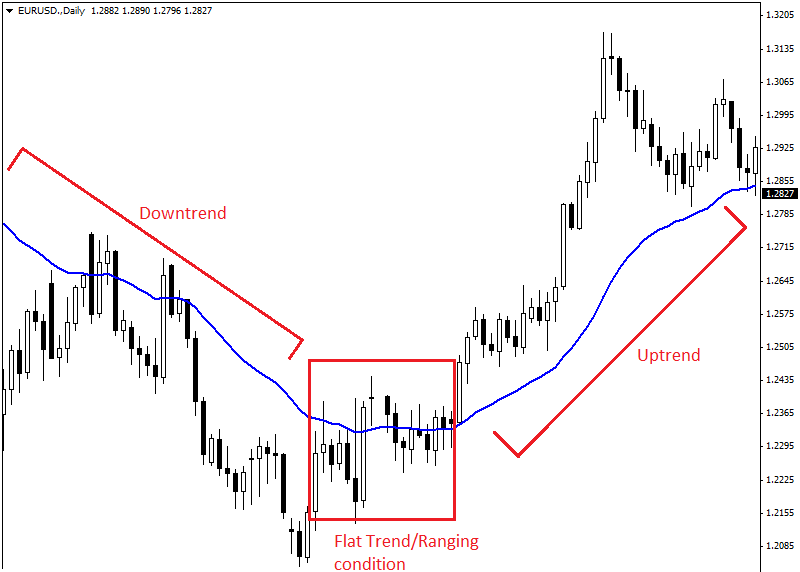 Trend reversals identified by the crossover between two or more moving averages of different periods. Let’s take two moving averages in consideration, SMA10 and SMA30. SMA10 is faster than SMA30 as its period is smaller than SMA30. When SMA10 crosses above SMA30 then it is a sign that trend has reversed to uptrend from the downtrend.

Now, when SMA10 crosses SMA30 from above then it is a confirmation that the trend has reversed to downtrend from uptrend. Both uptrend and downtrend reversals have shown in the example in the daily chart of EUR/USD given below. 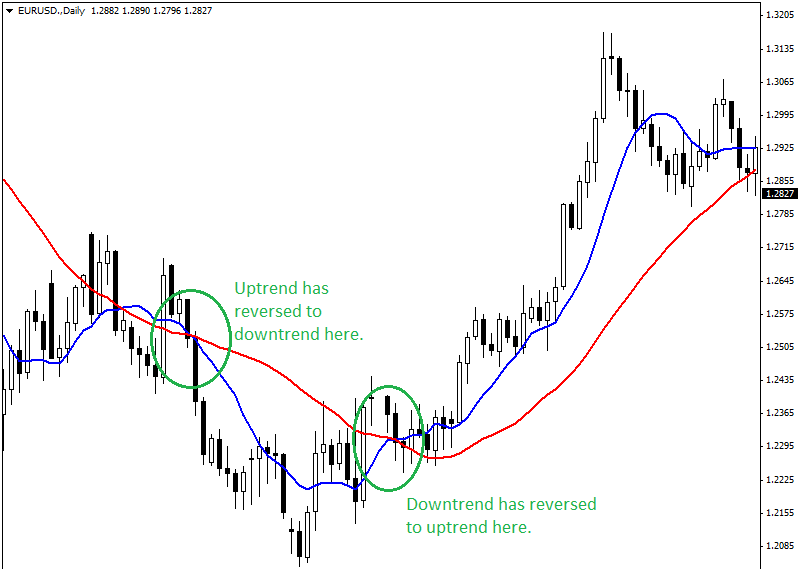 In an uptrend price tends to get support whenever its price or candle comes near moving average. Thus, most of the times price bounces back to its previous trend from the moving average. This scenario is a bullish pullback. 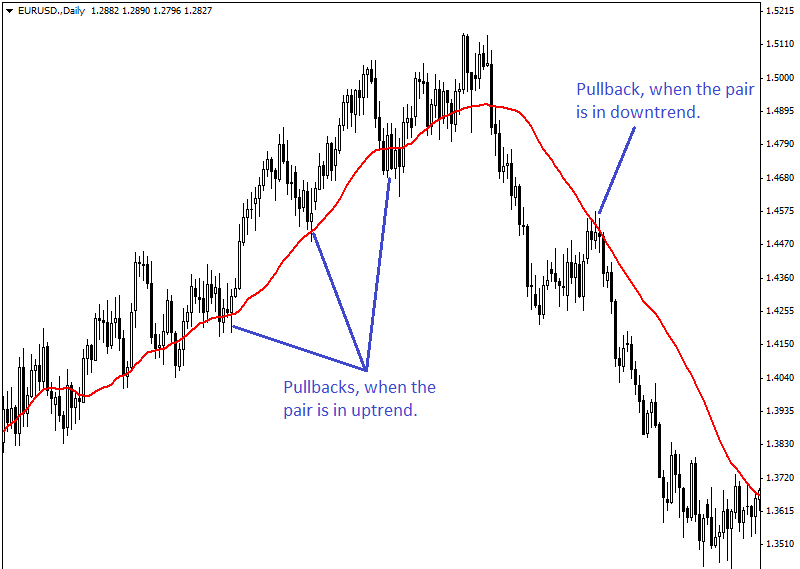 In this way, moving averages can be used as dynamic support and resistances.

Trading the pullbacks near the moving averages is a very effective strategy. However, other momentum indicators or oscillators should be used with moving averages to make a better combination to provide entry signals.